Problem-based learning. Creativity in developing better ways to select medical school candidates. National and international awards for teaching and education research. Innovation in starting Canada’s first midwifery and civilian physician assistant programs. These are just a few of the many ways the Michael G. DeGroote School of Medicine has earned a reputation in Canada and around the world as a risk-taker, innovator and leader in medical education. 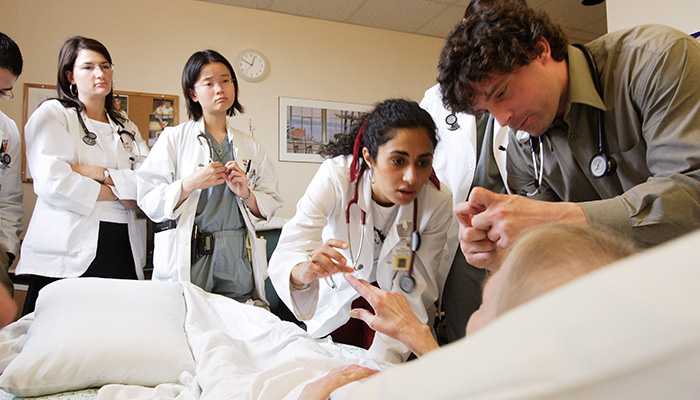 These are just a few of the many ways the Michael G. DeGroote School of Medicine has earned a reputation in Canada and around the world as a risk-taker, innovator and leader in medical education.

It was John Evans, the first dean of the school, and the five founding fathers of William Spaulding, James Anderson, Fraser Mustard and William Walsh who, with support of then McMaster President Harry Thode, decided to make McMaster unlike any other medical school.

They landed on a medical education application of problem-based learning that came from law school in the United States.

“The founding fathers essentially deconstructed and then reconstructed the entire concept of medical education,” said Paul O’Byrne, dean and vice-president of the Faculty of Health Sciences. “They had the idea that students should learn about medicine the way they would practise medicine, which included learning around case descriptions in small groups.” 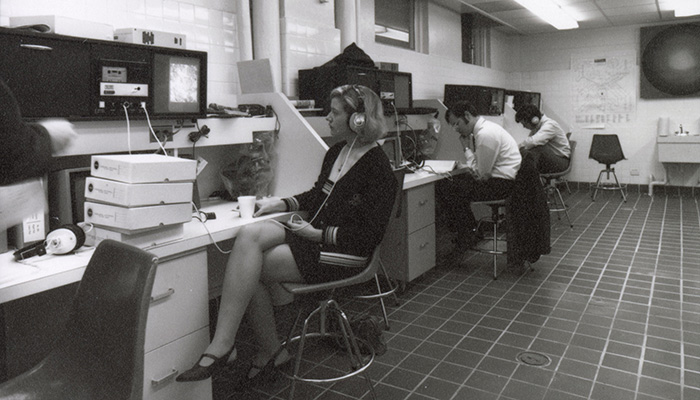 Many other medical schools around the world have adopted elements of PBL, but McMaster has not rested on its laurels.

In September 2005, the Michael G. DeGroote School of Medicine introduced a revised curriculum called the COMPASS curriculum. Its structure strove to foster integration of critically important fundamental concepts in medicine and afford an opportunity for students to have the time to practise applying these concepts to multiple different clinical problems.

In the summer of 2019, the medical school rolled out curricular changes that built upon the tenets of the COMPASS curriculum.

However, among these changes, the three letters remain at its core.

“I think some of what we do at McMaster now is very similar to other schools, but we still have our initial founding fathers’ commitment to small group, problem-based learning,” said Alan Neville, vice-dean of health professional education for the Faculty of Health Sciences.

One aspect that has McMaster’s medical school has also proudly retained is early patient interaction and emphasis on patient-centred care.

“We’re still one of very few medical schools in the world where students have early patient interaction and where the patient interaction is of a real clinical or medical nature,” said Rob Whyte, associate dean of undergraduate medical education. “Lots of students in medical schools are in the clinical environment and are where the patients are, observing but not participating in any type of patient care until the second half of their medical training. Our students begin as early as the second month of medical school.”

The start of postgraduate medical education in Hamilton dates back to the ’50s when there were about 18 residents a year and interns in the city. Now McMaster has more than 1,225 medical residents and fellows in 57 post-graduate specialty and sub-specialty programs.

The new outcomes-based training model for residents in specialty programs is called Competence by Design (CBD). This is the tailored version of CBME from the Royal College of Physicians and Surgeons of Canada, transforming specialty medical education from a time-based to a hybrid model combining a time and outcome-based approach. 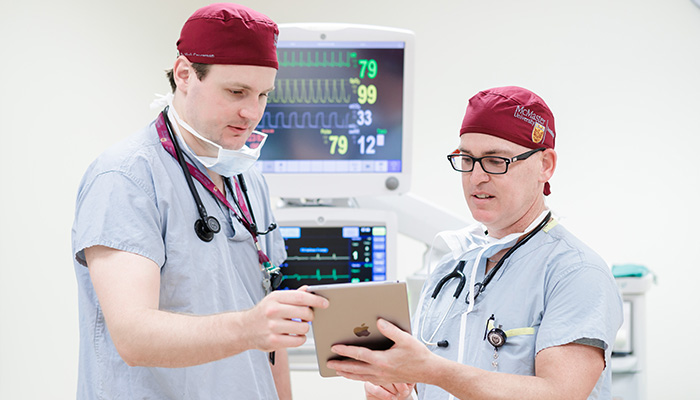 CBME in family medicine and specialty programs offers a more robust assessment system and greater focus on learner needs with the intended outcome of producing competent, confident health care practitioners prepared to serve the needs of the community.

“Our rich history has grounded postgraduate medical education in excellence that has prepared us well for the next phase of growth.”

Faculty members of McMaster University’s medical school developed two admissions tests which assess the medical school candidate’s people skills and are now used widely by Canadian and American medical schools. These include the Computer-Based Assessment for Sampling Personal Characteristics, or CASPer, and the Multiple Mini Interview, known in the education industry as MMI.

The medical school focus on innovative thinking also helped pave the way for new ways to develop the health care team with the first midwifery and physician assistant education programs in Canada.

Founded in 1993, McMaster is the lead of a consortium with Laurentian and Ryerson universities to offer the Midwifery Education Program.

In 2008, McMaster launched a Physician Assistant Education Program, led by John Cunnington, a graduate of the first medical school class, as assistant dean. The inaugural class of 21 students, and the 206 graduates who have followed have been pioneers in developing a new role in health care provision in the province.

Some of the top educators of the world have been drawn in by the culture of innovation and collaboration of the medical school.

Three professors of the medical school have received the prestigious 3M National Teaching Fellowship: Bruce Wainman, professor of pathology and molecular medicine and director of the education program in anatomy; Pantangi (Chari) Rangachari, professor emeritus of medicine, and the late Del Harnish, vice-dean of undergraduate education for the Faculty of Health Sciences.

In 2008, Geoff Norman, professor emeritus, Department of Health Research Methods, Evidence, and Impact, took the international Karolinska Institutet Prize for Research in Medical Education for his career as a medical educator and researcher at McMaster. 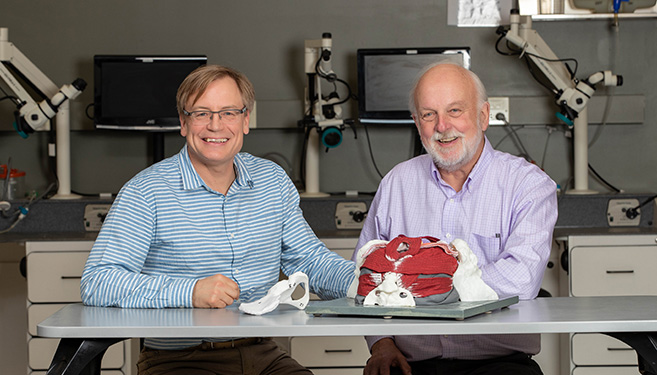 Educational innovations will continue in the passing years, bringing change, and that’s OK, according to Allyn Walsh, professor emerita of family medicine and daughter of medical school founder William Walsh.

“I think all of the founders knew that things couldn't stay the same,” said Walsh. “They weren't about tradition and I would guess that none of them would want to see the medical school doing just what they did back in the beginning. I know dad was really proud of the medical school.”